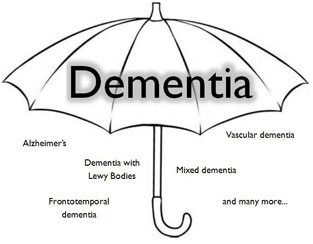 Alzheimer’s may be the most common type of dementia, accounting for an estimated 60 – 80 percent of all cases, but it is not the only one. According to the Alzheimer’s Association, “dementia” is a general term for a group of conditions that affects a person’s mental capabilities severely enough to interfere with everyday life; memory loss is just one example of many possible symptoms. Although types of dementia may overlap, they are associated with distinct symptoms, patterns and distinguishing microscopic brain abnormalities. 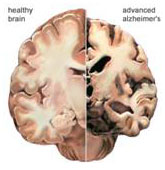 As mentioned before, Alzheimer’s disease is the most common type of dementia. There are 3 different stages of Alzheimer’s: Mild (Early-stage), Moderate (Mid-stage) and Severe (Late-stage). Early symptoms may include difficult remembering names and recent events, apathy and depression. Unfortunately, as the disease progresses, so do the symptoms. Your loved one could start to experience impaired judgement, disorientation, and confusion. It’s heartbreaking to know that they may even have changes in their personality and they may suffer from difficulty speaking, swallowing, or even walking.

What’s happening with Alzheimer’s patient’s brains? Scientists have discovered abnormal deposits of two different types of proteins called “plaques” and “tangles”, forming build-up between cells. It leads to nerve cell death and tissue loss in the brain. Over time the brain shrinks dramatically, diminishing to two-thirds the normal weight, affecting nearly all functions.

Comprising of about 10 percent of all cases, vascular dementia has many symptoms that overlap with Alzheimer’s disease. Someone living with vascular dementia has impaired judgement or a poor ability to make decisions. The initial symptom in most cases has been an inability to plan or organize, or the person will become quite slow with their thinking, as opposed to memory loss.

What’s happening to cause vascular dementia? There are a couple possible reasons: blood vessels might be blocked or damaged, or there could be bleeding inside the brain. Those blocked vessels may be because of, or could lead to, a series of small strokes. In short, this type of dementia decreases blood flow to parts of the brain which then affects the individuals thinking and physical functions.

Evidence indicates that many people with dementia have brain irregularities associated with more than one type of dementia. In most cases, it is a mixture of Alzheimer’s Disease and Vascular dementia, but there have been cases of some seniors living with three types: Alzheimer’s, Vascular and Lewy Bodies dementia. The Alzheimer’s Association said that recent studies have suggested the prevalence of mixed dementia is greater than what was originally thought. They also believe that the possibility of having more than one type of dementia is associated with increasing age.

Most experts estimate that dementia with Lewy Bodies is the second most common case of dementia, accounting for 10 to 25 percent, just after Alzheimer’s. People who have been diagnosed with Lewy Body dementia will experience many symptoms that include a progressive loss of memory, language, reasoning or other higher mental functions - like calculating numbers. Your loved one may, unfortunately, have intense visual hallucinations. It is very common for someone to see people, children, animals, or other things that are not actually there. They may even have errors in perception, like seeing faces within inanimate objects, for example, a rug.  This happens again and again, and can get worse when they are confused.

What’s happening in their brain? Well, similar to Alzheimer’s patients, people living with Lewy Body Dementia have abnormal protein deposits forming inside the brain’s nerve cells. These deposits, called “Lewy bodies”, interrupt messages in the sections of the brain that control thinking and movement. Unfortunately, as with many types of dementia, it is unknown how Lewy bodies form.

‘Frontotemporal Dementia’ is actually a general term for a group of rare disorders that primarily affect the frontal (front) and temporal (side) lobes of the brain – the sections that are associated with behaviour and personality. It often occurs in younger men and woman, at about 2 to 5 percent of all dementia cases. In addition to affecting younger people, it is known that the average length of the disease can vary. This type of dementia has symptoms similar to Alzheimer’s, such as impaired judgement, memory loss, behaviour changes, mood swings, or difficulties with speech and movement. Usually personality and behavioural symptoms happen early on whereas disorientation and getting lost occurs later.

When someone has frontotemporal dementia, what is going on in their brain? In some cases, the brain cells shrink or even die, and in other cases, they grow or contain abnormalities.

Throughout the whole month of September, you can raise awareness about dementia and try to help end the negative connotations associated with the condition. On your social media accounts, use the hashtags #RememberMe or #WAM2016. Don’t forget, you can join the Alzheimer’s Disease International in promoting a better understanding of dementia by posting a picture of a post-it note to Twitter with your message on it.

Other Senior Care Services: There are many unexpected situations for which you are not prepared. Home Instead Senior Care Kitchener-Waterloo, ON can help your family dealing with your special circumstances. Here some of our additional senior care services.

Benefits: Learn how home care benefits you and your family.

Quality Care: We are commitment to provide quality care for our clients. Read more about our Quality Home Care.

FAQ: Please visit our FAQ section to get answers to your questions about in home senior care in Kitchener-Waterloo, ON.

Reviews: Read home care reviews from families in Kitchener-Waterloo, ON.

Awarded CAREGivers: Every month we award the Caregiver of the Month. Please see the Best CAREGivers in Kitchener-Waterloo, ON.

When you need in-home care services, look to Home instead to deliver the excellence and compassion you deserve. Learn more about the experienced senior in home care​ we deliver.