Learn more about our COVID-19 response here ! Official resources and tips to be kept up-to-date as the situation evolves.

At Your Service 24/7 in West Toronto, Ontario

The need for in-home senior care services doesn't always arise between 9:00 a.m. and 5:00 p.m. on a weekday. That is why our team stands ready to serve you any day of the week, at any hour of the day or night.


We have come together as a group of dedicated professionals to deliver a home care solution that meets your needs. We employ trained, screened and bonded CAREGiversSM​​to serve your family's senior loved one with compassion and devotion. Fiona Martins lives and works in downtown Toronto and loves working in the community.

Fiona graduated from Central Technical School's Registered Nursing Assistance Program in 1985. Following her graduation, she traveled to destinations such as England, Scotland, Italy, Austria Holland, Turkey, Greece and South Africa and her love of travel have taken her to Portugal, Panama and Mexico in more recent years.

While in England Fiona worked at Great Ormand Street Children's Hospital on the oncology and haematology floor. She worked as a registered nursing assistant in both England and South Africa and gained an understanding of the different practices in other countries and how healthcare is managed outside of Canada. Fiona eventually returned home to marry her best friend from high school.

After returning from abroad, Fiona pursued her other goal which was to return to school to complete the education and training required to become a Registered Nurse. Upon graduation, she was employed as a full-time nurse at St. Michael's hospital and worked in a variety of different areas of the hospital including General Surgery, Neurology/Neuro Surgery, Orthopedics, Cardiology and Cardiovascular surgery.

After working in at St. Michaels Hospital for 11 years, Fiona shifted gears and started working in community-based healthcare. At Storefront Humber, she worked as the lead in the Adult Day Program for seniors with Dementia. Fiona then worked for West Toronto Support Services again as the lead of the Adult Day Program which was a much larger program with triple the clients.

In 2005 Fiona's love of community-based nursing was rekindled as a result of her father becoming terminally ill. The outstanding palliative care he received inspired Fiona to return to the community and become a community nurse with Spectrum Health Care which lead to a position at the CCAC/LHINS. In that capacity she worked at Sunnybrooke Hospital as a discharge planner for the oncology and palliative floors, before transferring to the Palliative team for 9 years. Highly organized and detail-oriented Shannon Verge brings over 20 years of experience providing thorough and skillful administrative support to senior executives, as well as overseeing office management. Her colleagues rely on her to solve any problem, big or small. Shannon is a dedicated, focussed and self-motivated professional with excellent analytical, research and writing skills. She has a keen ability to grow positive relationships with clients and colleagues at all organizational levels.

In her spare time, Shannon enjoys travel, spending time with family and her two cats. She also is a skilled baker and cake decorator.

When not supporting our Home Instead clients and staff team as one of our weekend On-call Supervisors Dawn is a Service Coordinator with Community Head Injury Resource Services (CHIRS).

Dawn attended Humber College in the Social Service Worker program and has 17 years of experience at CHIRS, taking on various roles associated as the Neuropsychological Assessment Clinic Coordinator and coordinating and supervising PSWs and PSW students in their placements with CHIRS. In March of 2018, Dawn accepted a secondment as the Service Coordinator for the Finch Residence and since has moved into the position permanently. Dawn also serves as the lead for interRAI-CHA assessors, conducting annual assessments, attending LHIN meetings, and ensuring that all new assessors receive formal training and complete competency testing.

We all know that our team and clients are well cared for on the weekends with Dawn and Natasha there for support just a phone call away. When not supporting our Home Instead clients and staff team as one of our weekend On-call Supervisors Natasha is a Community Facilitator and Case Manager with Community Head Injury Resource Services (CHIRS) for over 19 years.

Natasha brings a passion for caring with clients in the vulnerable sector and has developed numerous innovative program activities and care plans for clients throughout the city. She is an honours graduate of the Humber College Social Service Worker Diploma and Life Skills Training Certificate and has further training in Crisis Prevention and Intervention (CPI) Training.

Natasha knows first hand the challenges families and clients face when navigating through the Health and Long Term Care process. She is there to support our team and clients in times of crisis and celebration.

Natasha is a committed to professional development expanding her skill sets with Psychopharmacology and Brain Injury support training through George Brown College. Her engaging personality and empathic ear are a gift to our team and for those who find themselves seeking support or information.

We all know that our team and clients are well cared for on the weekends with Dawn and Natasha there for support just a phone call away. Chloé was awarded a Master of Communication and a Master of Business at the University of Brussels. She has professional experience as a Marketing Manager and Web Developer in the tech industry.

She started working for Home Instead as a caregiver. She wanted to experience caregiving for the elderly…and she loved it! She realized that being a companion to isolated seniors was very rewarding and fulfilling.

Chloé later joined Home Instead team as a Marketing and HR coordinator.She was delighted to be able to make good use of her computer and marketing skills and to contribute to such as great and valuable cause. With over 18 years of national and international leadership experience, Darci is a progressive Human Resources consultant. Her background includes working with professional services firms, not-for-profit organizations, retail enterprises, healthcare, manufacturing, distribution and creative agencies. The support and guidance HR Compass brings to our team is invaluable.

Your Home Instead team in Toronto, ON possesses a heartfelt desire to work with seniors in the community. It is our ultimate goal to forge extraordinary relationships between our clients and their CAREGivers. 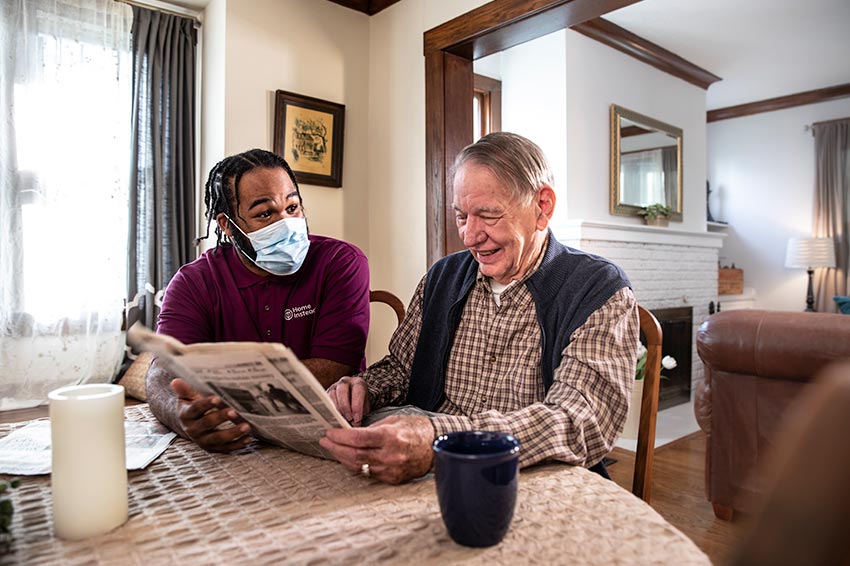